When the Butterfly Effect Founder Tasha Wahl saw Carrie’s Social Butterfly photo and message posted on social media, she reached out and asked if she could share. “At Butterfly Effect we are passionate about using social media to share and amplify how we are each being the change we wish to see in the world. One of our favorite quotes is, ‘Seek the courage to face adversity in ways that lessen rather than add to the suffering of the world,’ and we feel like Carrie is a shining example of this. Carrie, we are cheering you on and whole heartedly applaud your amazing strength and courage!”

Carrie Bates had everything – an education, a family, a career, a home and even an Olympic gold medal in swimming from 1984. Then her alcoholism brought everything to screeching halt. “I lost everything in my drinking,” Carrie says, “Except my life. The only thing I didn’t lose was my life.”
Her drinking got progressively bad through her 30s. First, it was purely social, but then she’d start drinking before she’d go out so nobody would know the extent of her addiction. Then she stopped going anywhere at all. She dropped out of her own life, drinking at home, alone, with the shades drawn. At that point, Carrie’s two children were living with their dad, and she was going through a divorce. Her friends started to tell her they were afraid for her life.

Once, she detoxed at home for five days, which she described as extremely dangerous. “I think I really wanted to die in detox. … That was the beginning of this change. I knew I was done drinking.”

The Butterfly Connection
Carrie considers even her failed attempts at sobriety the beginning of her journey as the seeds that would one day bloom into full recovery. In 2012, she checked into her fourth treatment, 90 days in Palm Springs, and finally came home. “I had to deal with all the wreckage of my drinking. I lost my career. I had lost my family. I lost most of my friends, and I had to start my life completely over. And I was terrified. And I will never forget. … The butterflies in Palm Springs were part of that spiritual journey,” she remembers. “The butterflies, the hummingbirds, and they have a bunch of little rabbits on the campus of where I got sober.”

And that’s why, last summer, when she and her husband driving in San Francisco during a vacation, she saw something that took her breath away. They were driving down a random side street in a not-so-great neighborhood and Carrie suddenly saw a Social Butterfly on the wall. “There were addicts everywhere. And I was like, ‘My God, I’m with my people,'” Carrie says. Carrie was so compelled by the butterfly they pulled over and got out so she could get a picture in front of it. “It just spoke to me, the whole ‘be the change’ and how the butterfly re-creates itself. It’s always been a thing for my recovery, about how you can re-create yourself as a person when you get sober.”

Which she did. She’s managed to stay sober, she works helping others to get help, and she’s closer than ever to her two daughters, Miya and Gabby, now 17 and 20. “They, too, give back to the recovery community,” she says. “It’s not just my story, it’s our story …They talk to other kids (who have parents who are struggling with addiction) about how they felt when I was sick. And so we have found so much peace through our truth. But it all comes from this change, this metamorphosis, this complete willingness to explore.”

She hopes that her sharing her challenges and success publicly will help others. “I’ve been trying to lend my voice to get rid of the stigma of addiction and to hold my hand out to other women who are struggling. I just try and be of service to the struggling alcoholic or addict, or their family members.”
The butterfly and the concept to be the change remain important to Carrie, beyond the photo she took on that San Francisco street. “I can’t sit here and say, ‘we have to stop that’ and do nothing, and do nothing to participate in the elimination of the stigma and the shame. Because this is a shame-based disease. People don’t want to say it out loud because they’re ashamed. And my thing is, that being the change in the world is to stand up and say, ‘No, I will not be silent in my recovery because I was silent in my addiction.'”

Carrie offers these words to those who are still in the painful part of their recovery journey: “Keep trying. Don’t give up. Most importantly, I would say, you’re worth it.”

If you’re seeking help around an addiction, contact a 12-step program such as Aa.org or NA.org, which have lists of meeting schedules by zip code. Carrie also invites you to connect with her via Facebook or Instagram. 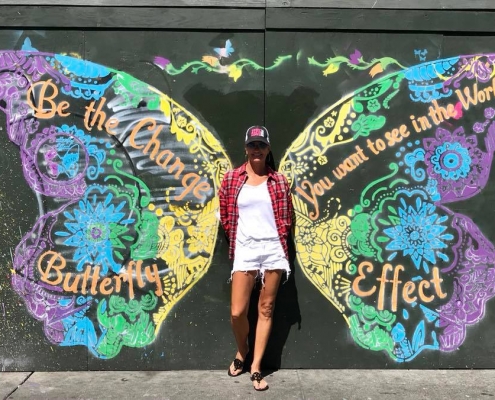