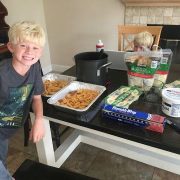 Sawyer James is the kind of kid you just can’t keep out of the kitchen. “If he gets a chance to get up before the rest of the family, he will hurry to get ready because he wants to be the one to cook breakfast,” says his mother, Alison.

Sawyer recently turned his passion into compassion by channeling his talents for charity. The 8-year-old third grader cooked for friends and neighbors to raise money for a Butterfly Effect Butterfly Drop, which in turn, funded a faith-based organization, Compassion International https://www.compassion.com, which helps children in need.

The week before Thanksgiving, Sawyer posted a video about his fundraiser: “Who likes to cook the week of Thanksgiving? Who wants to help other people? I have a way to do both,” he started off, and explained the concept of the Butterfly Drop, which he learned about in school. He offered friends and neighbors to cook and deliver homemade chicken soup with bread or baked ziti with salad for a minimum $20 donation.
Alison said that the project manifested with several delightful, unexpected benefits. First, they realized that people were willing to pay more than the minimum donation amount. “They were willing to go above and beyond, so that was really cool and special for him,” Alison said. From six or seven deliveries, after expenses, Sawyer made $175 for charity. One person made an order on behalf of a local friend with cancer so that the family could take a night off from the kitchen. “I’m just grateful that we were able to help her and her family out to spend more time together instead of worrying about some of those basic things while she was going through all that,” Alison said. Her friend passed away shortly after.

She appreciated being able to spend time in the kitchen with Sawyer—doing the project together amped up their bonding time. He also learned to make a website https://goo.gl/Uu4GNZ to share his results and journey at school.

Philanthropy comes naturally to Sawyer. “He’s one of those kids who gives money away the second he gets it, so this project was right up his alley,” Alison said.

Sawyer said he was really happy with the project. “It feels great and other people should do it too,” he said. He offered this advice for other kids who want to help but don’t know how: “Start maybe just give a little and maybe you’ll like it and maybe give more.” 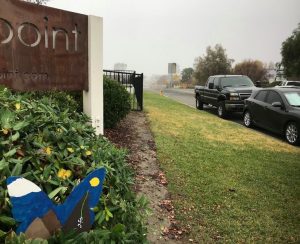 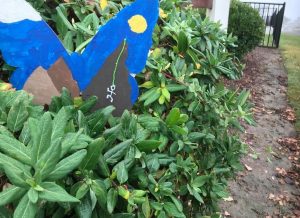